One of the things about having been involved in making an album which, years later, sells for hundreds of pounds (or dollars) is the nagging thought that its value has more to do with its rarity than its quality.

We only pressed 500 copies of the Caedmon album in 1978, for the simple reason that we couldn’t afford any more and couldn’t press any less. Thirty years later, how many are still in existence?

And how does the rarity affect the value? If say, 200 are out of circulation, and the value of the remaining albums is £500 each, then what happens when another 10 go out of circulation. Are the remaining albums now worth £517.24? Or does the market see the continual shrinking of the available pool and increase the value by some more sophisticated futures based mathematical model?

Well, to all you speculators and collectors out there… SIT UP! The value of the Caedmon album (original vinyl 1978) has just increased.

On Saturday 19th April 2008, at around 11.30am, I sat on my Caedmon album. That’s one more copy which is now permanently out of circulation. 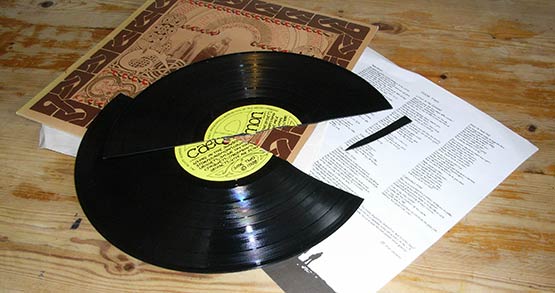