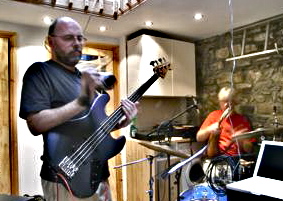 Forty two years have passed. The band has got together to record seven new songs in an album called ‘RARE’. These is teamed with six unheard Caedmon tracks from 1975/78 in a vinyl package reminiscent of their first album: a 12″ LP and a 7″ single.

‘RARE’, title track, reflects upon the story of the ’78 album. Originals command four figure prices in the vinyl collecting world and they have become a grail for Acid Folk collectors.

On the 30th anniversary of the break up on the band they reformed meeting for weekends in Weardale, Co. Durham, in the north of England.

Caedmon was always a weird mixture of musicians and their musical influences jostling to find some space to work together. With thirty years to establish and cement those disparate styles, what did this bizarre mixture bring to the table?

Jim doesn’t use a fuzz box to try and rock out quietly, Ken plays everything including the cello, Simon has dropped the bongos for a full drum kit, Sam now plays a gut throbbing five string bass, and Angela… well Angela, initially reluctant, has been persuaded to get behind a mic again. Now she’s a working vet, and possibly the only member of that student band that actually does what she trained for at university.

So how has the music changed in those thirty years? The evidence of their toil is now available on Amazon, iTunes, and eBay in a smart digipak-ed limited edition CD or as download: ‘A Chicken to Hug’

Initial reviews find a connection between the old and new in their music. Also, thankfully, there’s a sense that Caedmon’s music has progressed expressing maturity, variety and novelty.