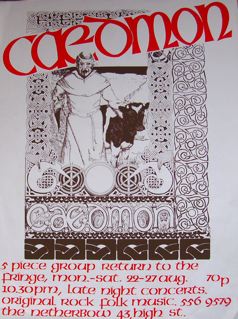 All three were veterinary students.

Both join the band in early 74. First concert as a 5-piece in Pollock Halls, Baird House common room round about Easter 74. At the end of the summer vacation there is a slightly abortive week’s rehearsal at Elm How, a pink cottage in the Lake District. Andy and Ken can’t make it because of failed resits. Angela, Simon and Sam jam for hours and spend a lot of time walking to the shops which are about 4 miles away. Andy leaves vet school for home in Aberdeen and Ken transfers to Psychology.

Simon’s course takes him to France. Fiddler Alan Torrance plays with Caedmon in his absence. Jim, Ken and Sam move into a flat together along with Jim’s sister. They tour widely in a borrowed Austin Maxi and a Volkswagen Caravette. Alan Stevens (another Vet student) helps with sound.

Caedmon appear at the Edinburgh Fringe for a week of late night concerts at The Netherbow Arts Centre on The Royal Mile, with Gordon Strachan (photography), Carolyn Dougill (sound) and George Anderson (lighting).
They start to play weekly in The Mitre pub on the same street. Tony Welbrock starts to sound mix for the band.

Second year at the Edinburgh Fringe for a week of concerts. 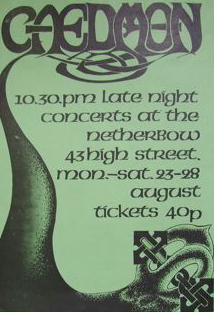 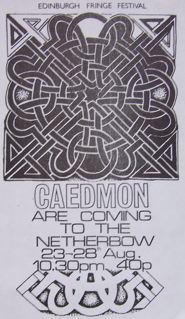 At the end of the week they travel overnight in their Ford Transit van ‘Abysilda’ to perform the following afternoon at the Greenbelt Festival in a marquee. Squeezed by programming needs into a meagre slot to accommodate ‘Nutshell’.

They record their eponymous LP to celebrate their five years as a band. They spend two weekends in Barclay Towers Studio in a garret in Bruntsfield. Twelve tracks are mixed down. Ken designs sleeve, Sam the sleeve notes, Angela the lyric sheet and a photo is taken on Arthur’s Seat. Twelve tracks proves to be too much for one album so a 45 rpm single is included in the package. 500 copies are made. They are sold at the Farewell Concert in George Square, Edinburgh in the month of March, to friends and fans. Ken and Angela leave Edinburgh.