Classification genres are surely made up by collectors and not by musicians. But it is interesting that clear criteria can be worked up.
Here’s some definitions summarised from psychedelicfolk.homestead.com. I suspect that they’ve all been coined some time after the heyday of the folk rock revival of 1965 – 1980.
Acid Folk: acoustic music that doesn’t reproduce or start from traditional elements…a reinvention of folk, producing a mind-freeing experience.
Folk Rock: typified by Fairport Convention and Steeleye Span… a combination of folk and rock based upon traditional tunes, Folk Music with some electric guitars and drums.
Psychedelic Folk Music : “psychedelic” as a musical genre is often associated with “mindexpanding experiences”, which are absolutely not necessarilly drugs-experiences. There are musical effects used, to express such an experience. In acoustic music, this could mean a somewhat open tuning and freedom for jamming improvisation, there are casual eastern influences.
Progressive Folk : when the “progressive” elements are very well worked out in instrumentation, but the basic use of acoustic instruments is still important.
Wyrd Folk: it’s something like acoustic music with an open, intuitive idea, acid folk music with purity, honesty, etc. without that it necessarily has to be psychedelic or completely free.

Caedmon’s music does, in some way, match up to all these different classifications. They never met Stone Angel, Mellow Candle, Comus and the other names which nestle together in histories of Acid Folk and so on. To be honest I’m only just starting to listen to them now, after thirty years.

So, bands that never knew each other, where there was no ‘cross pollination’ in performance or otherwise, can now be parcelled together. Listeners have found similar sounding bands through ‘wishlist’ culture: an ‘if you like this….. then you’ll like this’ approach. The commonalties no doubt arise as a result of the fusion of influences heard at the time of music making, the sounds made on vinyl by major bands with recording contracts.

What were the musical influences for Caedmon in the years leading up to 1978?

I followed Pentangle (I saw them playing live in the early seventies three times …. including a show with an all electric guitar line up ….. with Orange combo back line amps). Simon was a Fairport Convention devotee, and I remember being impressed on hearing Sam’s Yes Album for the first time….. Jim played Humble Pie at great volume on Saturday mornings in the band flat progressing to Sly and the Family Stone, Rufus and Funkadellic in the period up to 1978.

Is interest in Caedmon because of their instrumentation?

Current reviews of the Caedmon album dwell upon instrumentation: ‘This scottish outfit released this sole album in 1978, and it is one of the best and rarest psychedelic folk albums of the uk. Tasteful use of cello, acoustic guitars, mandolin, bongos and some wild fuzz assaults’. We used what skills we had (including Simon’s clarinet playing, not featured on the 1978 album) without feeling the need to emulate more conventional instrumentations: e.g. lead guitar, rhythm guitar, bass and kit or a folk line up of fiddle, whistle, guitar and bass, that were in the music we listened to. Angela’s pure voice, Jim’s ‘fuzz guitar’, Simon’s mandolin and songs, Sam’s bass guitar virtuosity, and Ken’s ‘cello…….. make Caedmon ‘Acid’ or ‘Psychedelic.

The lack of drum kit, is surely a key factor in the 70’s Caedmon sound?

Also reviews comment upon layered voices: ‘This is a worthy complement to Fairport or Pentangle, containing some exquisite male and female vocals’….. this again reflected the times we had enjoyed in our teenage years: The Beatles, America, Crosby, Stills and Nash & even The Carpenters were an influence upon vocal arrangements as well as the ear harmony tradition of folk music.

In our approach to writing and arranging new songs, we were post-Beatles in our thinking with an ‘anything goes’ attitude resulting in an eclectic mix of styles. There was, however, a need for us to justify the lyrical content of our songs to the Christian community we served. I remember much debate in the band about whether we were musicians whose faith became evident in writing, or Christians whose prime mission was to ‘spread the word’ through the medium of music. We, as individuals, represented a broad church of Christian views from low church to high, evangelical to conservative, so our make up was complex in more than just musical style.

In parallel with secular musical influences, the lyrical content was affected by similar Christian artists and bands: Parchment, Nutshell, Larry Norman, Randy Stonehill, After the Fire, the bands who were at the forefront of the genre.

But I think it was our peers who performed in Edinburgh at the time who influenced our approach to lyric writing and presentation the most. David Heavenor and Jamie ………. regulars at Charisma, Ricki Ross who played piano and wrote songs with ‘Under the Sun’ in Dundee before his Deacon Blue success, and ‘Miracle Road’ who became ‘Ever After’.
Also we were influenced by those who visited Edinburgh and performed alongside us: e.g. Adrian Snell, then a pianist singer song writer and `The Water into Wine Band’ from Cambridge. 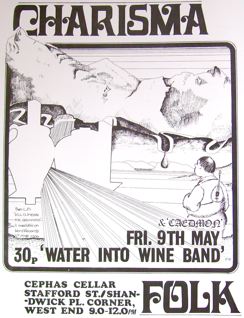 We were over earnest and young, we were naive, but we were original. And if you were the blog reviewer who wrote ‘I mean, come on, what’s with the Caribbean-Celtic tracks?!?’ …… my reply to you is: we were just experimenting with all that was about us and having a good time. There were no rules about genre mix.

Had we known that in 20 years the internet would provide a distribution network for our LP to large numbers of listeners, we would have laughed and gulped and then spent more time recording it. We certainly could have ironed out the slips in intonation and meandering tempos (which we as performers of course listen to most) …… but perhaps some of the freshness would have been lost.

In 1977 we played a week of successful late night concerts at the Edinburgh Fringe. We packed up after the last gig, a Saturday night, and set off in our grey Ford Transit for Bedfordshire after midnight. We were hitting the ‘Big Time’, playing at The Greenbelt Festival. We shared driving through the night, noticing that the headlights were gradually dimming: some sort of alternator, dynamo, battery problem. We kept on going, there wasn’t much traffic and we had our important gig to make in only a few hours time.
At 4am we took a ‘comfort break’ in a lay by. A police car pulled up out the gloom. The police seemed convinced that drugs were to be found. We wore denim, had long hair, & were in a beaten up old Transit. In the time that it took him to interrogate us about possible substances, dawn broke and we eventual set off without having to switch on the pitiful lights which, if the officer was trying to make a conviction, were a much better line of enquiry.
The long arm of the law seemed convinced of our classification as ‘folk on Acid’.
We didn’t drink, do drugs or have any psychedelic experiences.
(Does Mac Barren’s Scottish Mixture count? Jim, Ken and friend Lance Stone enjoyed a pipe smoking phase….. a curious and unpopular pastime …… ‘Who’s that smoking custard?’)……..