Photos above from left to right: 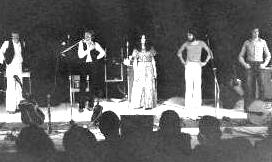 Ken played ‘cello and piano from the age of eight. Both were taught in a very formal led by reading exercises and exams. It was teaching himself with his first guitar at the age of fourteen that opened open the world of chords and harmony to him. He played in various ‘Gospel bands’ at school and developed the ability to accompany by ear. He was initially a vet student at Edinburgh but changed to Biological Sciences after two years of resitting exams. He specialised in Psychology in his honours year.
During Caedmon’s Edinburgh Fringe appearances, he worked in The Netherbow’s restaurant and hatched a plan to work with food. After a 18 months as an underbuyer in Fenwicks of Newcastle he set up shop in Rothbury, Northumberland with ‘The Old Sun Country Kitchen’ a tearoom. After three successful years, and becoming Egon Ronay recommended, he trained as a primary school teacher.
In 1984 he had is first job as a teacher in Newcastle. Music started to lead his career path again in 1991 when he became advisory teacher for primary music in the Newcastle LEA. He introduced steel bands in a large number of schools, and contributed to National Curriculum working parties. Community music became a major strand with Pineapple Agogo, The Heaton Peoples Band / Tenth Avenue Band and various teenage bands.
In 2000 he became a freelance musician working closely with Folkworks, The Sage Gateshead and co-directing ‘4 Corners World Music Network’ with Richard Scott (Grand Union Orchestra).
In 2004 he started acting with Theatre Sans Frontieres, touring nationally, and has written the music for a number of their shows.