In the mid-1970s Gordon Strachan was director of the Netherbow, the Church of Scotland Arts Centre. The Netherbow is now part of the Scottish Storytelling Centre where we had our reunion concerts in May. Gordon was an enthusiastic and nurturing supporter of the band and without him Caedmon wouldn’t have been what it was and is.

One year on the Festival Fringe he let us record in the studio (see Caedmon: the Netherbow Recordings) and play in the courtyard at lunchtime (recorded in Alan Stevens’ painting – I’m not sure we have a copy on line, do we?). In the two following years he booked us for a week of late night shows in the Netherbow Fringe programme. He graced us by playing his plastic trumpet at our farewell concert.

Gordon and Elspeth, who ran the Netherbow café and later became Mrs Strachan (see photos), came to one of our reunion concerts in May and Gordon looked well and cheerful. It was a shock to find he’d died only a couple of months later. Below are links to Appreciations of Gordon given at his funeral and published in The Scotsman, along with the funeral Order of Service. They give a better idea of Gordon’s eccentric but exhilarating personality than we can.

We will be dedicating the new album to him. 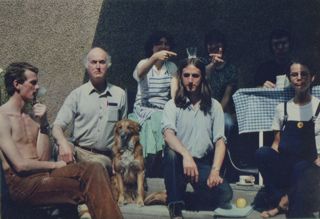 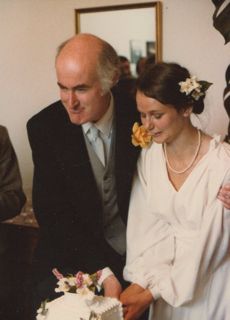